Welcoming all our Christ the King families old and new back to school. Please join us all for a fun afternoon for all at the school field. Bring your picnic blanket. Sunday 18 September 2022, 1pm to 4pm.

On 8 September we celebrate the Nativity of the Blessed Virgin Mary, as it is nine months after the solemnity of her Immaculate Conception on 8th December. Our Lady and Saint John the Baptist are the only ones beside Jesus himself whose birth dates are commemorated. The Bible does not record Mary’s birth, and the earliest known account is found in the Gospel of James, an apocryphal text from the late second century, where her parents are named as Anne and Joachim. The birth of Mary is even narrated in the third chapter of the Qur’an.

Some accounts placed the birthplace of the Virgin Mary in Sepphoris in Israel, others at Nazareth or Jerusalem. The earliest mention of the feast itself comes from the sixth century, when the first liturgical commemoration is connected with the sixth century dedication of the church now called Saint Anne’s in Jerusalem, erected on the spot thought to have been the home of Mary’s parents. At Rome, the Feast began towards the end of the 7th century, brought there by Eastern monks.

In France, the feast is known among winegrowers as “Our Lady of the Grape Harvest”. The best grapes are brought to the church to be blessed and there is a festive meal that includes the new grapes. In Malta, the feast is referred to as Victory Day, since it coincides with three major victories throughout Maltese history, including the end of the Siege of Malta during the War in 1942. Churches are decorated for the occasion and there may be brass band concerts / marches, fireworks and a procession.

It is an important feast in parts of India. In Kerala it is a major celebration among Saint Thomas Christians. An eight-day time of prayer is observed from 1st September. On the day itself special food is prepared in churches and distributed to the faithful in the afternoon, while at home there will be a festive meal. In Mangalore on this day every Christian eats pulses and vegetables. The priest blesses a branch of grain which is added to the food. In Mumbai, the feast is celebrated with a week-long event called Bandra Fair, and in Goa, the feast is a major family celebration. Further east in the Philippines, people would dress images of the toddler Mary in pastel colours and crown her with flowers. In 2018, the House of Representatives there officially approved a bill to make September 8th a “working holiday”. An interesting concept…

The relics of St Bernadette will be in St David’s Cathedral, Cardiff for 24 hours from 11 September at midday.
To register your attendance visit www.stbernadette.org.uk/the-tour
Further details of the itinary are below. 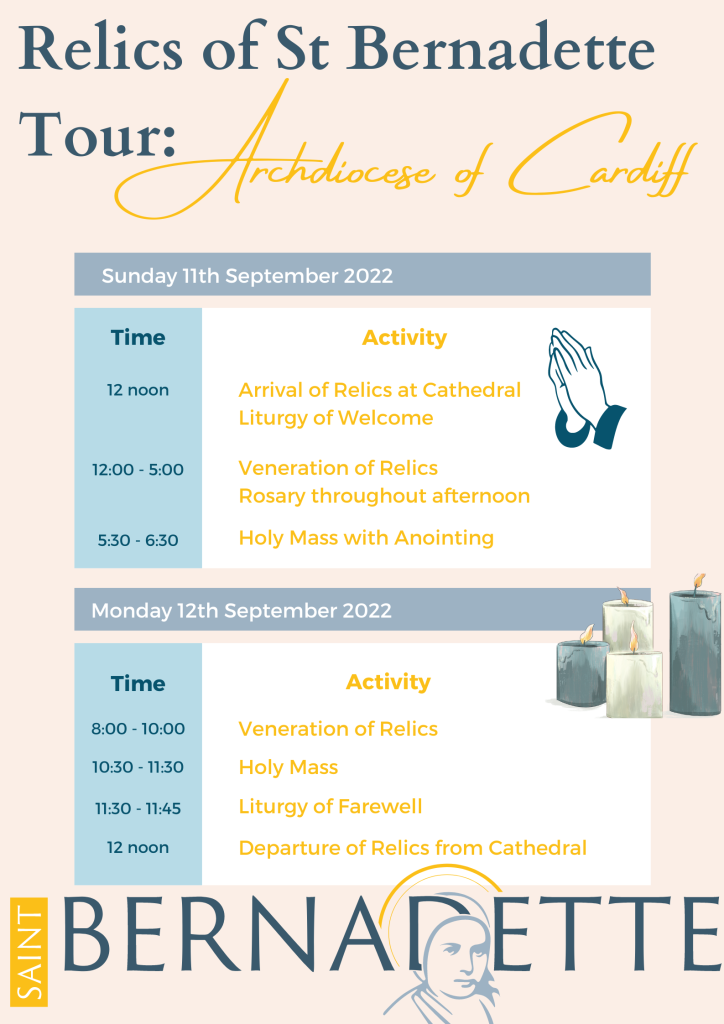 On Monday we remember the passion and death of St John the Baptist. He was said to have been buried at the Palestinian village of Sebastia, near modern-day Nablus in the West Bank.

Relics were being honored there in the fourth century and the tomb continued to be visited by pilgrims, and St Jerome bears witness to miracles being worked there. Today, the tomb is said by some to be housed there in the Nabi Yahya Mosque (“John the Baptist Mosque”).

Relics of the saints have always had a fascination for many as centres of devotion. What became of the Head of John the Baptist is particularly hard to determine, and the centre of curious rivalries. Some ancient authorities say that Herodias had it buried in Jerusalem possibly in Herod’s palace, where it was found during the reign of Constantine and secretly taken to Phoenicia. There it was hidden for years, until it was manifested by a revelation in 453. In any case, over the centuries several different locations claim to possess the relic. Among the various claimants are:

The jokey priest there when I was in seminary in Rome in the 70s used to joke that their head was when John the Baptist was a younger man!