The hottest place I have ever been must be, I think, a spot in the Jordan Valley in the Palestinian Territory near Jericho that we visited on pilgrimage in 2014. This is where St John’s Gospel says St John the Baptist started his ministry, “Bethany beyond the Jordan” and here Jesus came and was baptized. Now most pilgrims to the Holy Land visit another “Baptism site”, very beautiful, and near to the Sea of Galilee, but hardly anyone nowadays believes that to be the actual spot. Tradition says that the Jericho site was a goal for pilgrims from the earliest days, that many of John the Baptist’s followers stayed in the area, churches were built, and monks lived in nearby caves, but centuries later, when the time of the Byzantine Empire and Crusades ended, the site became neglected and pilgrimages eventually stopped.

In 1897, a scholar from Jerusalem discovered the Madaba Map, a 6th century mosaic depicting the Middle East, and study of it led to interest in the exact location of the Baptism. Pilgrims started to return hoping to find clues, and a church was built, but the World Wars and the conflicts in 1948, 1967 and 1973 made the site a no-go area for most of the 20th century. It became a militarized zone, full of mines, until Jordan and Israel / Palestine. A member of the Jordanian royal family got interested in the eastern, Jordanian half of the site. This led to excavations which discovered mosaics and ruins of a church, and later many more archaeological remains. Altogether the remains of five different churches, built at separate times, have been found.

Ancient pilgrims’ accounts show how closely their descriptions matched with what has been discovered. In AD 530 Theodosius wrote of ’the place where the Lord was baptized there is… the church of St John the Baptist, which the Emperor Anastasius built: this church is very lofty, being built above large chambers, on account of the Jordan when it overflows.” The remains of the piers over which this church was built were now discovered. Also in the 6th century Antoninus added that there were marble steps descending into the water, and these were found too.

I remember staggering back to the coach in the heat on that afternoon, where signs to left and right of the fenced track warned of still buried mines. But I wouldn’t have missed for the world the very spot where today’s Feast of the Baptism actually took place.

Download the 3 churches newsletter for Sunday 8 January 2023, the Baptism of the Lord (year A).

A Christmas full of peace and joy, and a New Year full of hope and love from your priests to all our readers and friends. 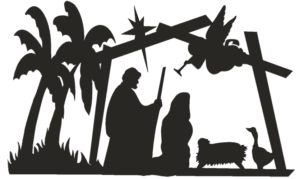 The Baby and Toddler Play Group will take a break for Christmas and return on 9 January.

The Fourth Sunday of Advent in the Year of Matthew – Year A in the lectionary – gives prominence to St Joseph’s role in the Christmas story. This is a poem written from his point of view, that I found – a little sentimental but charming. Let’s not forget St Joseph!

“We walked through the field of wheat
– a little Child and I.
His face was as fair as the dawn,
his eyes as bright as the sky.
O’er hillside and valley we went,
through blossom strewn meadow and glade. He held my hand as I told him the names
of all the flowers he made.

We worked at the carpenter’s bench
a beautiful Child and l.
The air was still as the star light,
and the Mother of Grace was nigh.
The burden of labour and toil
were sweet, though hard was my trade,
for I taught the heavenly Child to use
the tools which he had made.

We gathered for even tide prayer
– a Child, the Mother and I.
The only sound was the vesper song
of the birds that were flying by.
We gazed at the sinking sun
As the light began to fade
and saw a flame from
the heart of the Child
by whose power all things were made”

Our outward-looking magazine to inspire, inform and challenge perceptions.

Calling people of any faith, or none, or one that is fragile. Discover how Our Lord has touched peoples’ lives. Featuring inspiring stories, challenging props and thought-provoking music!